A Distinction In The Messianic Perspective

The water dipping that John performed in the Jordan in John 1, Luke 3 and Matthew 3 was not the Tevilah. It as the Mikveh.

In Priestly law, the ultimate purpose of ritual purification is to protect God’s sanctuary, the tabernacle, from contamination (Lev 15:31). Thus, for example, the high priest had to bathe before entering the tabernacle shrine (Lev 16:4). Washing was a physical act to prevent contamination by physical things, but it served a sacred function: through ritual bathing, Israelites marked off God’s space as holy and showed reverence for the divine presence. – Eve Levavi Feinstein

In the New Covenant, Eashoa is the High Priest of the Covenant people. He did it once and for all.

Priests of the Levites in the Mosaic Covenant were commanded to ritual cleaning with water and soap for specific reasons. It was called the Tevilah. The Tevilah of the Book of Leviticus was fulfilled by Moshiach in the B’rit Hadoshah (New Testament). Messianic believers in the B’rit Hadoshah do not need to undergo the Tevilah, but to abide in Moshiach for He is our High Priest. He is sinless, clean as it can be.

The Tevilah is a top to bottom immersion in water cleansing, nooks and crannies. Soap and water. I need to point out that the Tevilah is not the mikveh for the Bride of Moshiach (the bride of Christ). I have discussed in another article that according to the B’rit Hadoshah, it was only a Gentile that enters the mikveh. There are not instances in Scripture that a messianic Jewish believer received the water immersion, the mikveh. For instance, John the Immerser himself was not immersed while he dipped people in the Jordan. You may catch up on the article here: Water Mikveh (Immersion Baptism) https://daniels70thshavua.com/questions-of-baptism/water-mikveh-immersion-baptism/

The mikveh remains to today a water ritual for Jewish communities. There are commercial mikveh business at the Upper East Side as well as spa type resorts that are dedicated to the mikveh. A mikveh is not “just” a body of water, there are strict rules. The water must be sourced naturally. Obviously this rules out municipal water from the tab. Filling a bath is not the mikveh. The Jordan is an example of mikveh, where our Lord Eashoa was immersed in its living water.

There are internet “rabbis” who are not rabbis, who filmed himself getting into a bath tub and called that a mikveh. That video alone ought to be evidence that Rav is bogus. If you have seen it, you know.

Jews today still practice the mikveh, but not for faith purposes. Couples engaged to be married each enter their own unisex mikveh as part of the marriage requirements.

What Really Is Water Baptism According To The New Testament

For the messianic Gentiles, believers enter the mikveh as part of the marriage preparation for the betrothal to the Kinsman Bridegroom, our Lord Eashoa. It is done out of love. It guarantees no thing. It lets you tell the world that you love Eashoa. Salvation is by the Ruwach Elohim immersion, and the One that gives it to the believer is Eashoa and no other, no priests, no pastors, only by Him (Luke 3|16).

There are instances in the B’rit Hadoshah that indicate the ritualistic cleaning of Tevilah was expected by the Pharisees and the self-righteous. But recall, John turned the same group away from his Jordan immersion. John testified that the Tevilah is not his mikveh for the Messiah. The Pharisees may go on with their Tevilah but they are barred from the mikveh by John. This exhibit supports that argument that Tevilah and Mikveh are two different things.

7 But when he saw many Pharisees and Sadducees coming to his (John’s) immersion, he said to them, “You brood of vipers! Who warned you to flee from the coming wrath? 8 Therefore produce fruit worthy of repentance; 9 and do not think that you can say to yourselves, ‘We have Abraham as our father’! For I tell you that from these stones God can raise up children for Abraham. 10 Already the axe is laid at the root of the trees; therefore every tree that does not produce good fruit is cut down and thrown into the fire!

What the Orthodox Jews today need is to receive their Moshiach, Eashoa, who alone is the Tevilah!


“For over two millennia, Jews have been practicing tevilah, immersion of the entire body in water for the purpose of removing ritual impurity.” – TheTorah.com (On The Origins Of Tevilah)


“For the Pharisees, and all the Jews […] when they come from the marketplace, they do not eat unless they immerse; and there are also many other traditions that they observe, the immersion of cups, pitchers and bronze utensils” (Mark 7:3–4).


The Gospel according to Luke (ca. late 1st cent. to early 2nd cent. C.E.) tells of a Pharisee who invited Jesus to dine with him, but who subsequently was surprised to see that Jesus did not immerse before sitting down to eat” (Luke 11:38). In The Epistle to the Hebrews (ca. late 1st cent. C.E.), the cult of the Tabernacle is described as one which deals “only with food and drink and various immersions” (Hebrews 9:10). ]

The Priestly laws of Leviticus (so called because they were probably written by priests) require bathing to purify oneself from various things that were considered contaminating, such as skin disease (Lev 14:8-9), sexual intercourse (Lev 15:18), and certain bodily discharges (for example, Lev 15:5-6). These laws do not explicitly require bathing after menstruation, although they do consider it contaminating (Lev 15:19-24).

But some Israelite women may have bathed for this purpose: 2Sam 11:4 indicates that Bathsheba was purifying herself from her period around the time that David saw her bathing, which suggests that her moonlit bath may have been ritual in nature.  – Eve Levavi Feinstein, “Bathing in the Hebrew Bible”


The Example Of John

As a Levite, John dipped believers in the Jordan, a body of natural, living water, as the step of the mikveh as in marriage preparation. He declared the season of marriage in this speech concerning finding the Bridegroom, Eashoa, and the Bride. 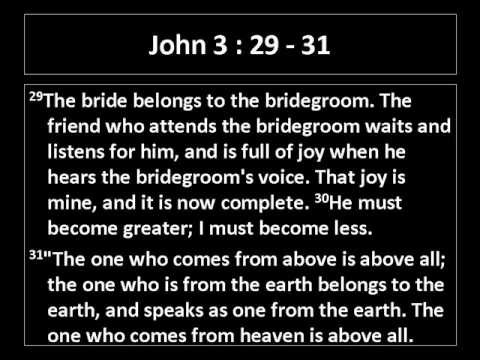 We too shall enter Gentile believers into the water mikveh in natural, living water today, to prepare believers for entering into the marriage to the Bridegroom, when Eashoa shall appear to collect the elect to paradeiso, to attend His celebration of redemption.

29 Immediately after the tribulation of those days shall the sun be darkened, and the moon shall not give her light, and the stars shall fall from heaven, and the powers of the heavens shall be shaken:

31 And he shall send his angels with a great sound of a trumpet, and they shall gather together his elect from the four winds, from one end of heaven to the other.